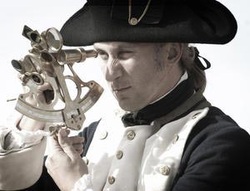 Matt is best known for his television appearance as navigator James Cook in the multiple award winning CAPTAIN COOK:  OBSESSION AND DISCOVERY for Australia’s ABC, which has been broadcast through partner station around the globe.  His family was also featured in the ground breaking documentary GAYBY BABY, which premiered at Canada’s Hot Docs before its festival, theatrical and television releases in Australia and internationally.

A former Broadway dancer, Matt toured the USA, Canada and Europe in musicals including ON THE TOWN, A CHORUS LINE and WEST SIDE STORY.  He was in the original Australian casts of THE PRODUCERS and YANK!

Matt is a private acting coach, and the founder of Tukuna Acting Club in Suva, Fiji.  He has been the screen acting trainer for Film Fiji, speaker coach for TEDxSuva and show producer for Fiji Fashion Week.

He made his film choreography debut with Mitch Davis’s THE OTHER SIDE OF HEAVEN 2.  He was the Fiji casting director for the 2020 Netflix hit series #blackAF.  In October, 2020, he directed and choreographed THE MYSTERY OF EDWIN DROOD at Mackay's Central Queensland Conservatorium of Music.

He is the host of THE STORY CHUNDER, a live event and podcast recorded at Brisbane's BackDock Arts.

In 2021, Matt starred as Max Bialystock in THE PRODUCERS for Altitude Theatre at the Brisbane Powerhouse, as Seutonius Paulinus in BOADECIA for Theatreroo, as Father D'Arcy in the benefit reading of ST JAMES INFIRMARY for Lambert House Enterprises, benefitting the Actors' Benevolent Fund of New South Wales, and as Bill Austin in MAMMA MIA for The Show Co.

Matt Young is a US born, Australian actor best known for playing James Cook in the multiple award winning CAPTAIN COOK:  OBSESSION AND DISCOVERY.  On tv, he's been seen in Hallmark's A SUMMER TO REMEMBER and PEARL IN PARADISE, TBS's WRECKED, and HBO's THE PACIFIC.  A former Broadway dancer, he was in the original Australian casts of THE PRODUCERS and YANK!, as well as productions of ANNIE, KISS OF THE SPIDER WOMAN and GOODBYE MISS MONROE.  He was the film choreographer for THE OTHER SIDE OF HEAVEN 2, director/choreographer for THE MYSTERY OF EDWIN DROOD for Mackay's Central Queensland Conservatorium of Music and Fiji casting director for Netflix's #blackAF.